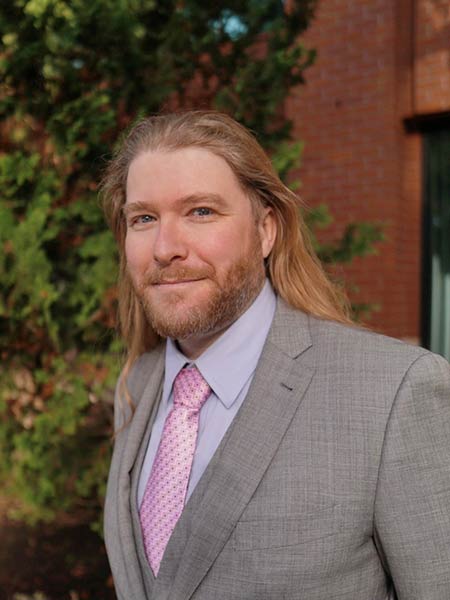 Prior to joining Thenell Law Group, Emerson Lenon operated a solo law practice while simultaneously operating a small craft brewery in Clackamas, Oregon. Growing up in Montana he learned self-reliance and developed a strong work ethic under his father, an architect, who ran his own firm for over 30 years. Prior to relocating to Portland to pursue law school in 2009, Emerson lived and worked in Montana and before that Hawaii, where he moved after graduating from the University of Canterbury in Christchurch, New Zealand. Graduating with a  Bachelors, with honors, in Philosophy, Emerson was  a perfect fit for law school. In 2012,  Emerson graduated from Lewis and Clark Law School. During law school he chaired several student groups, was active in the student bar association and competed in the Philip C. Jessup International Moot Court.

At Thenell Law Group, Emerson’s critical mind and creative approach to cases benefits the clients he serves in  a variety of employment, labor and administrative appeal matters. He represents employees in state and federal court ,bringing whistle-blower protection suits, discrimination and harassment, and wrongful termination suits on their behalf. Emerson also assists in public sector labor cases, helping employees file and pursue grievances for unjust discipline. Practicing in state and federal court in Washington and Oregon, Emerson has helped clients maintain professional certifications, obtain restitution for discrimination, and push back against unjust treatment by vested interests. Working at Thenell Law Group has provided Emerson with the opportunity to work with a wide array of clients, with unique cases and needs and he enjoys helping each of them find some modicum of justice.

Outside of work, Emerson enjoys the food and craft beer the Portland area has to offer, as well as the infinite variety of nature which the Pacific Northwest provides. You might find him at the coast, playing a round of golf with his friends, or on the slopes of the Cascades skiing, biking, or hiking . In the fall, Emerson and his wife enjoy finding wild mushrooms in the Coastal Range, or just going for a hike with their labradoodle Phoebe. During Major League Soccer season, you will find Emerson, at season ticket holder, at Providence Park cheering on the Timbers from the Army.